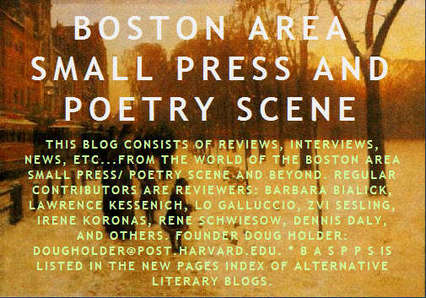 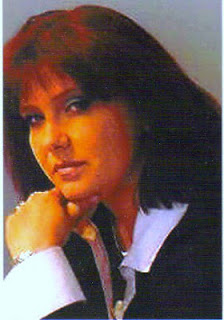 Rachael Popek
Rachael Popek is the producer for R Jeffreys’ popular radio show the The Write Step with R Jeffreys and is the Executive Coordinator, (working alongside Program Coordinator and Co-Chair R Jeffreys , and Coordinating Liaison and Co-Chair Kathleen Bitetti) for the 100,000 Poets for Change event at the Boston Public Library, Copley Branch, Sept 29 at 1 pm to 3 pm. According to Popek’s website the event will be”…the largest, single poetry reading in the history of the world. This event will also be archived, recorded and stored at Stanford University in California, and simulcast throughout the globe that day.”

Popek is also a Master Pastry Chef working for MultiGrains Bakery as an R&D specialist and Quality Director.
I talked with Popek on my Somerville Community Access TV show Poet to Poet: Writer to Writer.

Doug Holder: You are intimately involved in the 100,000 Poets for Change event next month at the Boston Public Library in September. You are not a poet…how and why did you get involved?

Rachael Popek: I am not a poet. My good friend R Jeffreys is the poet; I produce his radio show The Write Step on Blogtalk Radio. So when he decided to organize the 100,000 Poets for Change event, I went along with it. And I have become absolutely enamored with it. It is amazing to me that something that is usually considered as benign as poetry can be used in an activist manner. Over the centuries people believed poetry was quiet, benign, artistic and eccentric. I’m learning about literary history. And I have found out to my surprise that poetry has been one of the motivating factors in our history.

RP: When I was a young girl it was Robert Frost. I love Frost, and I loved the stories he told through his poetry. My parents used to read Robert Frost to me. Later poetry had gone by the wayside in my life but now I have come back to it.

DH: Can you tell me about the 100,000 Poets for Change event that you are involved with?

RP: On Sept. 29, 2012 there will be over 600 events and readings across the country that will be broadcast over the internet. The events will be taking place at many times throughout the day. It’s going to be bigger than last year’s event. The reading in Boston will be in the mezzanine of the Boston Public Library from 1 pm to 3 pm—and will be open to the public.  Featured poets will be R Jeffreys, January O’Neil, Charles Coe, Harris Gardner, Doug Holder, Sam Cornish and Philip Robinson.

DH: You are the producer of the popular Blogtalk radio show the Write Step hosted by R Jeffreys. Tell me about the show and your duties.

RP: The show presents interviews with poets, artists, writers, and musicians. We discuss what it takes to write what they write. We cover their upcoming books, albums, etc… We explore their own personal process through their creative work. We ask questions like:  What does it take for you to create?

DH: How do you find your guests?

RP:  R Jeffreys has an intricate network of friends. Some people come to us. Others we contact when we hear a new book is coming out.

DH: You are a Master Pastry Chef. That is very creative. How did you get involved with this?

RP: It started when someone dared me. Originally I was doing cooking at home. So someone said I should take the course and see if I could promote myself. My father who was a salesman, and traveled the world, told me he had a friend in France who would take me on as an apprentice. My two kids went with me. It was a great experience. I was in Paris every weekend. I was told to stay in France because America was not a good place for a pastry chef, especially for a woman.  I didn’t know how right this was. When I came back I couldn’t get a job because I didn’t have experience—it was a man-driven business.

DH: Can you make parallels between being a chef, and writing?

RP: Both start out with a summation. Writing consists of these questions: what is the story going to be about?—how am I am I going to break the story down?—what are the main characters, etc.?…  You do the same thing when you build a cake—when you are going to build a reputation. You go from scratch. The story and the cake have a foundation layer—so you are writing a cake in a sense.

DH:  You are working on a memoir Living Beyond Cancer: Not Just Surviving. Tell us about this.

RP: In Feb. 2012 I was diagnosed with cancer. I am a middle-aged, single mom-who without work would not have health insurance, and without insurance there would be no treatment. I wrote this book which is essentially about compartmentalization. I took out the unnecessary from my life so not only could I survive physically and financially, but I could live. I didn’t want to be overwhelmed with debt. I worked throughout my treatment.
I never missed a scheduled day of work. I was able to physically and mentally compartmentalize.


About Doug:
Doug Holder founded Ibbetson Street Press in 1998 with Richard Wilhelm and Dianne Robitaille. Ibbetson has published over 60 books of poetry and has released 26 issues of its acclaimed literary journal "Ibbetson Street." He conducts a series of interviews with poets and writers on his Somerville, Massachusetts Community Access TV Show "Poet to Poet: Writer to Writer" as well as for his literary column in The Somerville News, and at the Wilderness House Literary Retreat, founded by his friend Steve Glines.

Doug Holder will be one of the Performing Poets at this event.

Chosen by Blogtalk Radio as a Staff Pick show!

Please click the player to listen to the archived interview

Listen to internet radio with It Matters Radio on Blog Talk Radio
In 2011, Michael Rothenberg founded 100 Thousand Poets for Change. The concept-to bring communities together to enjoy the arts and communicate on positive change within their own neighborhood or throughout our world by organizing and planning events, which promote social, environmental, and political change with emphasis on peace and sustainability. Michael is a gifted poet, songwriter, painter and editor of Big Bridge Press along with co-founding Shelldance Orchid Gardens in Pacifica, CA.

R Jeffreys “Jeff” is the Project Organizer of the 100 Thousand Poets for Change, Boston, MA event. He is a published poet, essayist, novelist, playwright, Editor-In-Chief, reviewer and radio show host/producer of the popular 'The Write Step, with R Jeffreys'.

Also joining the broadcast is Rachael Popek, Executive Coordinator of the Boston event being held on September 29th, 2012.

"It is time for the artists of the world to take a stand for their towns, their neighbors and the good of mankind. It is time we join together to bring awareness via music, poetry, writing and open communication and in doing so, through strength of numbers, we can have the power to change the world." ~ Monica Brinkman, Host of the It Matters radio show. 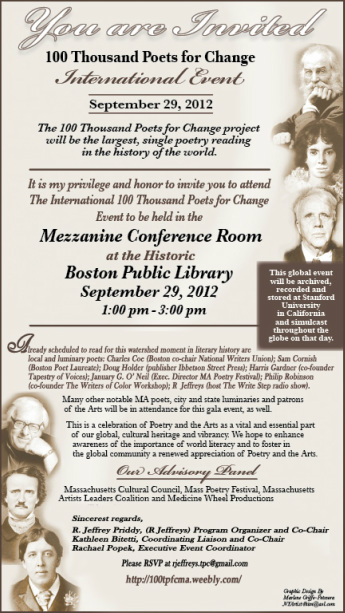 “This is a celebration of Poetry and the Arts as a vital and essential part of our global, cultural heritage and vibrancy,” R. Jeffreys “Jeff” says of 100 Thousand Poets for Change. Mr. Jeffreys’ blog, “The Write Step” is rated as one of the “Top Ten Blogs for Writing Advice” by www.NetworkedBlogs.com. As the host of the most popular radio show, The Write Step with R Jeffreys on the Red Rivers Writers network, Mr. Jeffreys is more than up to the challenge of hosting this year’s 100 Thousand Poets event in Boston. You can find out more information about this historic event at the MA chapter website, which Mr. Jeffreys has designed for the MA chapter.

How it all began

September 24, 2011 marked the very first 100 Thousand Poets for Change. The program advocates worldwide change through the arts. Founded by Michael Rothenberg, the program engages global and local communities in a simultaneous discourse that is both proactive and creative. Poets around the world participated in 650 events that took place in 550 cities in 95 countries in 2011. As of now the September 29, 2012 program has 550 events taking place in over 500 cities in 100 countries! With the day still three months away, this year is promising to be an exciting affair.

Last year’s event in Boston was organized by Chad Parenteau. The video is from one of the readings at Parenteau’s event in the Out of the Blue Art Gallery.

On September 29, 2012 the “100 Thousand Poets for Change” project will be the largest, single poetry reading in the history of the world. This event will also be archived, recorded and stored at Stanford University in California and simulcast throughout the globe on that day.

Jeff will host this year’s event at the Boston Public Library where attendees will hear poets, Charles Coe (Boston co-chair of the National Writers Union), Mass Poetry’s own Executive Director, January G. O’Neil and Philip Robinson (Co-founder of the Writers of Color Workshop.) “Our goal for this event is to expand the concept of the 100 TPfC as paying it forward with the Arts and poetry, as its pure art form for global change in social consciousness,” says Mr. Jeffreys.

This historical event at the Boston Public Library will be held in the Mezzanine Conference Room and begins at 1:00 pm with a short reception and will be followed by poetry readings. The event concludes at 3:00 pm and is free and open to the public. With seating for 100 people, the reading is sure to please all.
* If you’re interested in hosting your own event in MA you still have time.
You can sign up at the main 100 Thousand Poets or Musicians for Change by clicking this * official signup page link